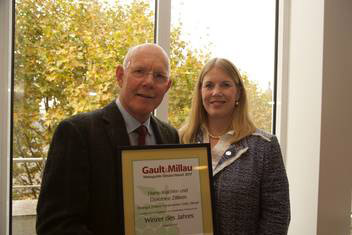 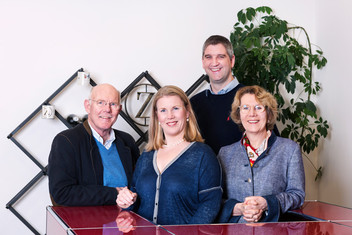 The Zilliken family traces its winegrowing tradition back to 1742. The early generations toiled in Saarburg and Ockfen, but it was Royal Prussian Forest Superintendent Ferdinand Geltz (1851 – 1925) who laid the groundwork for what would become one of the grandest family-owned estates anywhere on the Saar and Mosel. Ferdinand Geltz was a co-founder of the "Vereins der Naturweinversteigerer Großer Ring," an organization today known as the VDP Mosel-Saar-Ruwer (Verband Deutscher Prädikatsweingüter). It promoted the sale of premier quality unchaptalized wines as a way to raise the profile, both domestically and internationally, of the outstanding Rieslings being produced in this winegrowing region.
Following the death of Ferdinand Geltz, the vineyards were divided between his two daughters, Antoinette and Ella. Antoinette married a Prussian major, while Ella took a forester superintendent from Dessau as her groom.
In honor of Antoinette's husband, the Forstmeister Geltz estate was renamed Forstmeister Geltz Krick. After Ella's death, her daughters Marianne and Henriette inherited her share of the property. On Christmas 1944, the estate's house and cellar were completely destroyed in a heavy bombing raid. It was Marianne's steely determination that preserved the winegrowing tradition within the family. In 1947 Marianne married Fritz Zilliken, and from that point on the estate has labelled itself Forstmeister Geltz-Zilliken. The couple acquired a two-story cellar on Heckingstrasse in 1950, which still serves as the center of the estate's operations even today

The Geltz Zilliken cellar is the deepest in the Saar Valley, stretching three stories beneath the earth. Yet beyond the impressive dimensions, it also radiates an atmosphere of myth and majesty. The effect is so pronounced that its dimly lit halls have even served as the backdrop for detective films. And, as if by design, the natural conditions — humidity and cool temperatures of around 11 degrees Celsius — lend themselves to slow fermentation in neutral oak barrels.
We see our task as carefully preserving the potential the wine carries within itself. Wine is created on the vines; you cannot add anything in the cellar. The natural gravity of the deep cellar is harnessed to fill the barrels for fermentation, and in fact the wines are vinified from start to finish in those same wooden barrels. Nearby underground springs keep the cellar perpetually cool and extremely moist, ensuring optimal conditions for this approach to winemaking.

This focus on oak has actually fallen out of favor among high-end German winegrowers. At Geltz Zilliken it is considered an essential hallmark of an entire winegrowing dynasty.

Here in this cellar the Rieslings are stored for a slow bottle fermentation. This represents another crucial component of the Zilliken philosophy. Our wines are intended to mature. This kind of cellar is naturally also an ideal repository for our 'treasures,' including our library of historic vintages from the estate. Many wines take decades to reach their peak.
https://youtu.be/OT-5QJNPGP0