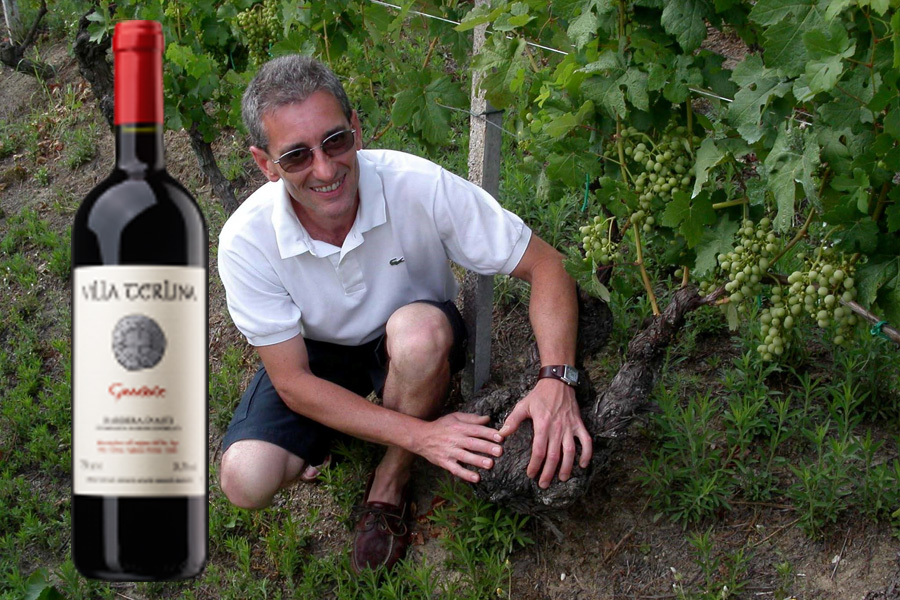 Villa Terlina is a small family owned winery which goal is to produce terroir-wines in strict adherence to organic agriculture. Each wine has its own personality, respecting the main characteristic of the year of producing. Villa Terlina doesn’t produce standard wines and uses only the grapes grown in own vineyards.

Winemaker Paolo Alleiata received his degree in Agricultural Sciences, followed by specialization courses in wine in Bordeaux and Beaune. He gained experience working in Tuscany, Germany and France as a winemaker. In St. Emilion he had the opportunity to make a long stage by Canon-LaGaffelière working with a fantastic team and gaining extensive experience in using barriques. This experience was not only a technical but especially an ideological one. Mr. the Count of Neipperg taught him, wine making is above all a question of passion, sensibility and respect for the terroir. In 1997 Paolo bought the Villa Terlina and began to make his own wine, persuaded to have found a particular terroir, allowing to create wines with a great personality. Since 2008 he has been working with biodynamic methods.

WORKING METHODS IN THE VINEYARDS
At the beginning, in 1997, the vineyards were exploited applying sustainable agricultural practices, environmental friendly but permitting the use of chemical products. After two years test in the Monsicuro, in 2008 biodynamical methods of cultivation were introduced in all the parcels. The position of the parcels with an optimal exposure makes particularly easy to work with this methods. Since 2010 the whole surface is under official control and certified since 2013.

In autumn, after the harvest, the soil is scarified and the Maria Thun Fladen is sprayed after a soft rain. In this period, plants as clover, pea, vetch, lupine, buckwheat and others were seeded to increase the fertility and the soil structure. Autumn is one of the period of the year where the micro-organisms in the soil are particularly active, than this is the moment to distribute some compost in the parcels which need it.

Winter is the time for repose in the vineyard. After the first frost, when the moon is descending, the pruning can begin. The pruned wood is chopped and returns back into the soil.

Spring is the time of the awakening. As the temperature becomes mild, the horn manure (D500 preparation) will be sprayed. D500 bring vitality in the soil. After one hour dynamization in a wood barrel, it is sprayed in the afternoon in a “fruit day”, following M. Thun calendar.

With the developing of the leaves, the mild temperature and the spring rain, come the fungal diseases, mildew and oidium. The biodynamic offers a lot of remedies against these plants pathogens, so that the use of copper and sulphur can be drastic reduced. Herbal teas of horsetail and nettle are very effective against mildew, camomile and achillea can reduce the use of sulphur against oidium. Willow tea improves the plants resistance. In this way, the use of copper can be reduced to 1,5 kg/ha/year (EU biological rule permit 4,0 kg/ha/year).

To control the insects, chromatic traps are used. Other biodynamic preparations are used depending of the year, chamomile by very hot summer, horn silica sometimes in the new planted vineyards and in autumn to help the lignification of the vine shoot. Recently we spry horn silica also in spring to improve the growth of the new shoots. Note: all the herbs are picked up early in the morning in own meadows, D500 and D501 are provided by Ivo Bertaina one of the best biodynamic consultants in Europe. Alle human interventions on the vine are carried out manually, even the harvest, where the grapes are carefully placed in boxes and taken quickly to the cellar, in order to respect the integrity of the product as much as possible.

WORKING METHODS IN THE CELLAR

Villa Terlina cellar is an old building in part dating back to the 18th century. There are no hi-tech equipments but all the phases of the vinification take place in a very simple way. The fermentation occurs spontaneously to respect the individual character of each vineyard. The lengthy maceration can go on for 3-4 weeks in case of Gradale, Monsicuro and Piediferro, it is generally shorter for the Bricco Francia. The fermentation of Monsicuro and Piediferro occurs leaving a part of the grape-stalk in the must after crushing.

After the complete alcoholic fermentation (<2g/lt sugar), the wines remain in the tanks until the malolactic fermentation will be completed. After this phase the Bricco Francia will be bottled after
3-4 months, the other wines go into the barriques to achieve the refining phase. The refining time is different each year depending on the characteristic of the vintage. Alle human intervention is kept to a minimum to preserve the identity of the wines, neither fining nor filtering are carried out.

Another intent is to reduce the level of sulphites in the wines without compromising their quality. By strength control of the oxydo-reductive conditions we can bottle the wines with about 35-60 mg/l sulphites.

For the bottling the most modern machineries are used, assuring the best hygienic conditions, all this is provided from a high professional operator coming to the winery with a big and well organized truck.

After the bottling, there follows the period (6-12 months) during which the wines are laid down in the bottle to complete their natural maturation before leaving the cellar.

One winemaker and 17 questions